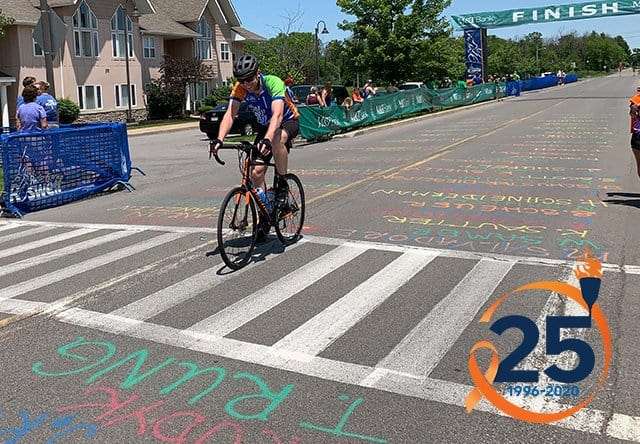 Life’s Big Surprise: Ted and Lauren’s Journey Through Life, Cancer and the Ride for Roswell

Spend two minutes chatting with Ted Rung and Lauren Suriani, and you’ll come to one conclusion – they are totally and completely in love with each other.

These Buffalo natives first met snowboarding at Holimont in 2006. After chasing each other around the slopes, they were hooked. Snowboarding has continued to be a huge part of their relationship – the pair even work at a ski resort in Vermont, where they also live full time.

When asked to describe her favorite thing about Ted, Lauren is ready with a thousand compliments.

“It’s his ability to overcome and rise to any occasion. He is one to always lend a helping hand,” she said. “My friends call him their stand-in boyfriend because they rely on him. Anyone can call him and he will help out – whether that’s jumping a car or something more serious.”

And Ted is ready, too.

“Lauren pushes me,” he said. “I have had a lot of down time with doctors’ appointments and sitting around waiting, not feeling great. She is not one to sit around. She pushes me to get up and do something, whether that’s going for a ride or just getting off the couch.”

Ted is a three-time cancer survivor, which means their relationship and love have been put to the test. But they always come out on the other side – stronger than ever.

Cancer first appeared in Ted’s life when he was 21 years old. In 2009, he found a lump on his testicle. Following a physical, his treatment was surgery to remove the tumor followed by surveillance at Roswell Park Comprehensive Cancer Center. Because of how simple and quick the procedure was, Ted didn’t take it too seriously.

Over the next eight years, he continued to make the six hour drive from Vermont for his checkups at Roswell to ensure he was cancer-free. But in 2017, he started putting off appointments and even went a year and a half without a visit.

So on a random Friday when he finally went in for a simple bloodwork test, he knew something was up when the doctors ordered a CT scan based on his results.

He had the scan Monday with Dr. Levine, and immediately, the doctors saw three tumors. The biggest one was against his kidney and was restricting its function. Ted’s cancer was back.

Right away, he and Lauren began figuring out a game plan. Because of the support of their families and because of Roswell Park, the pair decided that Ted would receive treatment in Buffalo. That meant a six-hour drive three to four times a month.

Sometimes, Ted would drive six hours, have his appointment, then turn around and drive back home. But to receive the best care he possibly could, it was worth it.

Ted’s treatment plan included three rounds of chemo followed by a major surgery called RPLND, which opened him up from sternum to pelvis. The surgery was successful, and after five days of care Ted’s pathology came back clear.

Ted rang the victory bell at Roswell Park – the same day as Hockey Fights Cancer – in 2017. He said it was a crazy, beautiful moment ringing the bell surrounded by cheers from all floors of the hospital.

After that, he was under close surveillance and went back every six weeks for checkups. Before long, a CT scan revealed a nodule on his thyroid. Doctors closely monitored the growth until it was big enough to biopsy. It was thyroid cancer.

For the third time, Ted turned to Roswell Park – this time to Vishal Gupta, MD, and team at the head and neck clinic. He successfully had his thyroid removed and a round radio iodine treatment, and now comes back every six months for more checkups. 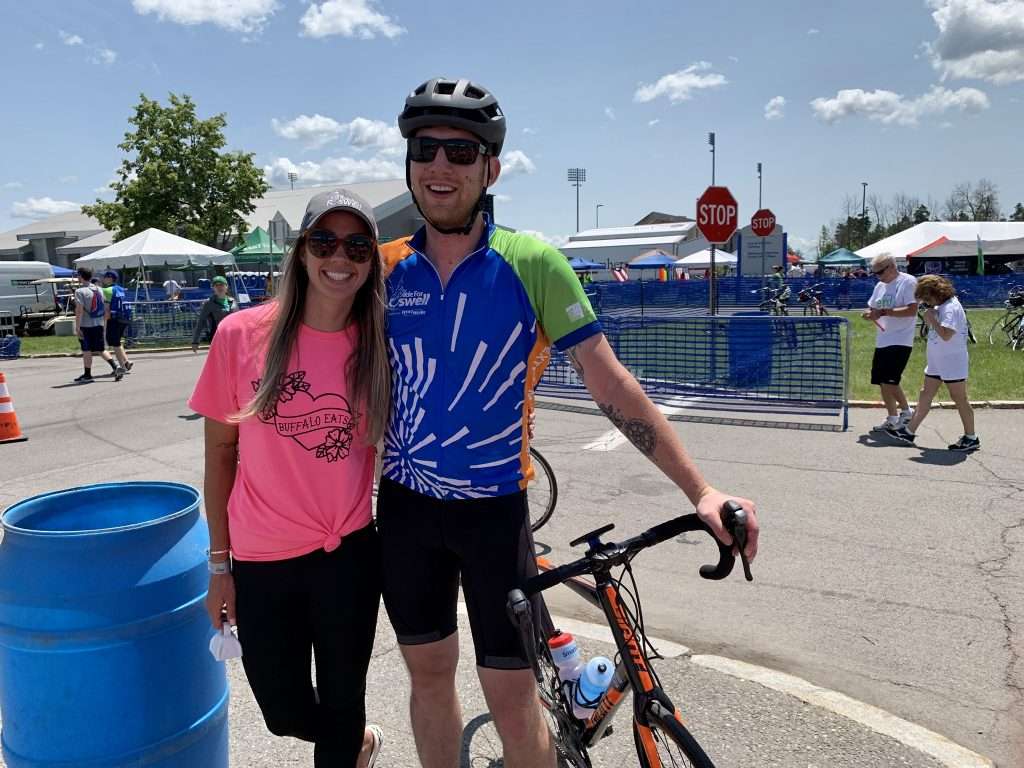 Both Ted and Lauren have been through a lot over the course of their relationship. How does Ted deal with it?

“I guess I have gotten good at dealing with with things as they come. But it was hard,” he said. “Every little thing makes you second-guess if you’re healthy or not, and it can weigh on you. But you have to trust the doctors and worry about what they tell you to worry about.”

For Lauren, it has been extremely difficult watching Ted go through this. But her advice is to keep living.

“You have to be resilient because it can take you right down with it,” she said. “You learn very quickly that two words out of a doctor’s mouth can change your life. Dr. Levine even told us, ‘I am about to turn your world upside down.’ He sure as hell did.

“But you learn to enjoy the big and small moments. And laugh at everything instead of getting angry.”

That piece of advice is how this incredible couple has gotten stronger despite everything life has thrown at them.

“In 2017, a month before my second diagnosis, we started to build a garage. It was supposed to take two months. But with chemo and having a major surgery, it took much longer. But we didn’t stop working on it. We asked for help when I couldn’t do it alone.” Ted said.

“We kept living,” Lauren echoes. “[Cancer] stops you in your tracks, but you can’t stop completely. It’s so hard to deal with it. But the only way to deal with it is to keep going.”

Ted's Road to the Ride 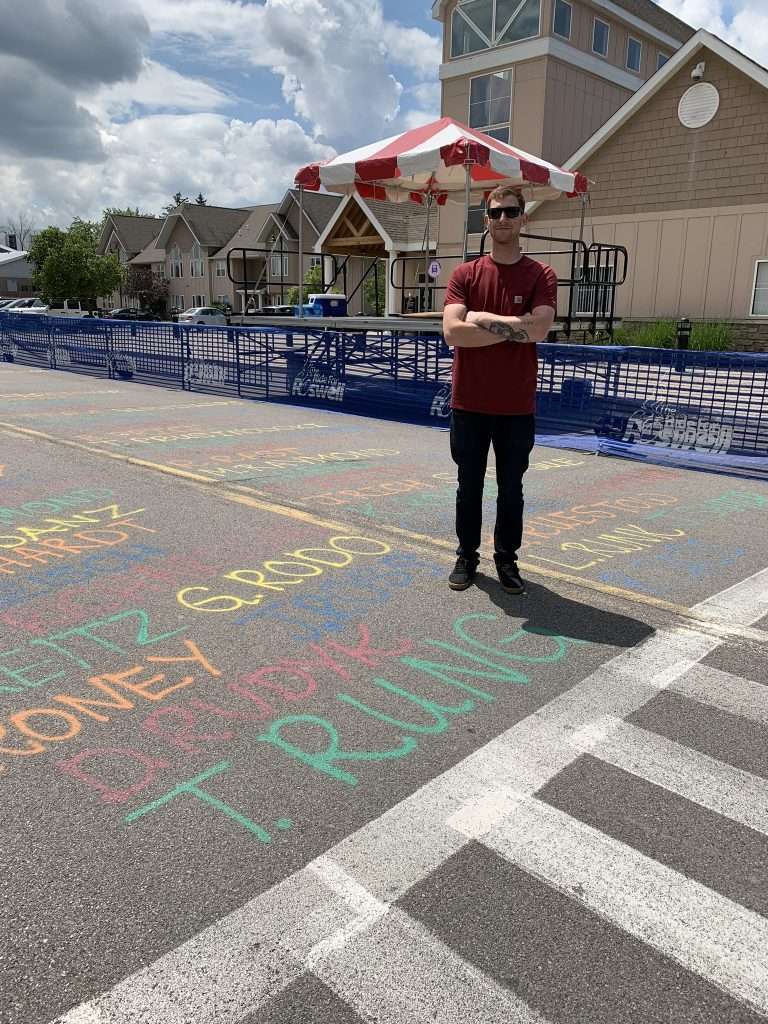 “Surviving cancer is just as hard as fighting it. You go through all these appointments, all these people paying attention to you, and then you’re on your own. You go about your day. You make it through and you move on, but you really don’t. [Because] it’s always there. So seeing all these people participate and support it … it’s just a good feeling,” Ted said.

Last year, Ted decided to keep going and participate in the Ride for Roswell. His challenge – tackle the 100-mile century on Ride Day. He was inspired by his father, who rode for him the first year after his diagnosis, as well as the team Lauren’s brother-in-law leads, Buffalo Eats.

So he started training whenever he could. And he crossed that finish line on June 22 looking like a pro.

“I guess I didn’t realize the gravity of the situation until the last few miles. I got pretty emotional about what I accomplished. Before that, I hadn’t ridden a bike since I was 15. I put a lot of work into it. And seeing my name painted on the road – it was awesome,” Ted said.

It was an emotional day for Lauren, too.

“I had my big sunglasses on, and I didn’t take them off because I was crying behind them. Cancer forced me to keep moving forward. Sometimes you keep everything inside. So you have these big moments, and you have this release of emotions. It was incredible,” she said.

And for Ted, knowing that people jump on their bikes every year for patients like him means the world.

Ted and Lauren are both planning on participating in the Summer of the Ride. Ted has his six-month follow up appointment at Roswell Park at the end of June, so they will ride a couple times throughout Buffalo. They will also continue to ride throughout Vermont. If you’d like to support their efforts, support Team Buffalo Eats here.

“The reason we come back to Roswell is because of the support and the sense of community it has brought to our lives,” she said. “I couldn’t see us going anywhere else. They saved Ted’s life – how do you say thank you for that? That’s why we try to ride and raise money to give back. It’s something I will be thanking [them] for, for the rest of my life.”

RIDE WITH TED AND LAUREN
PrevPreviousSpirit Week 2020 Is Here!
NextRide By The NumbersNext