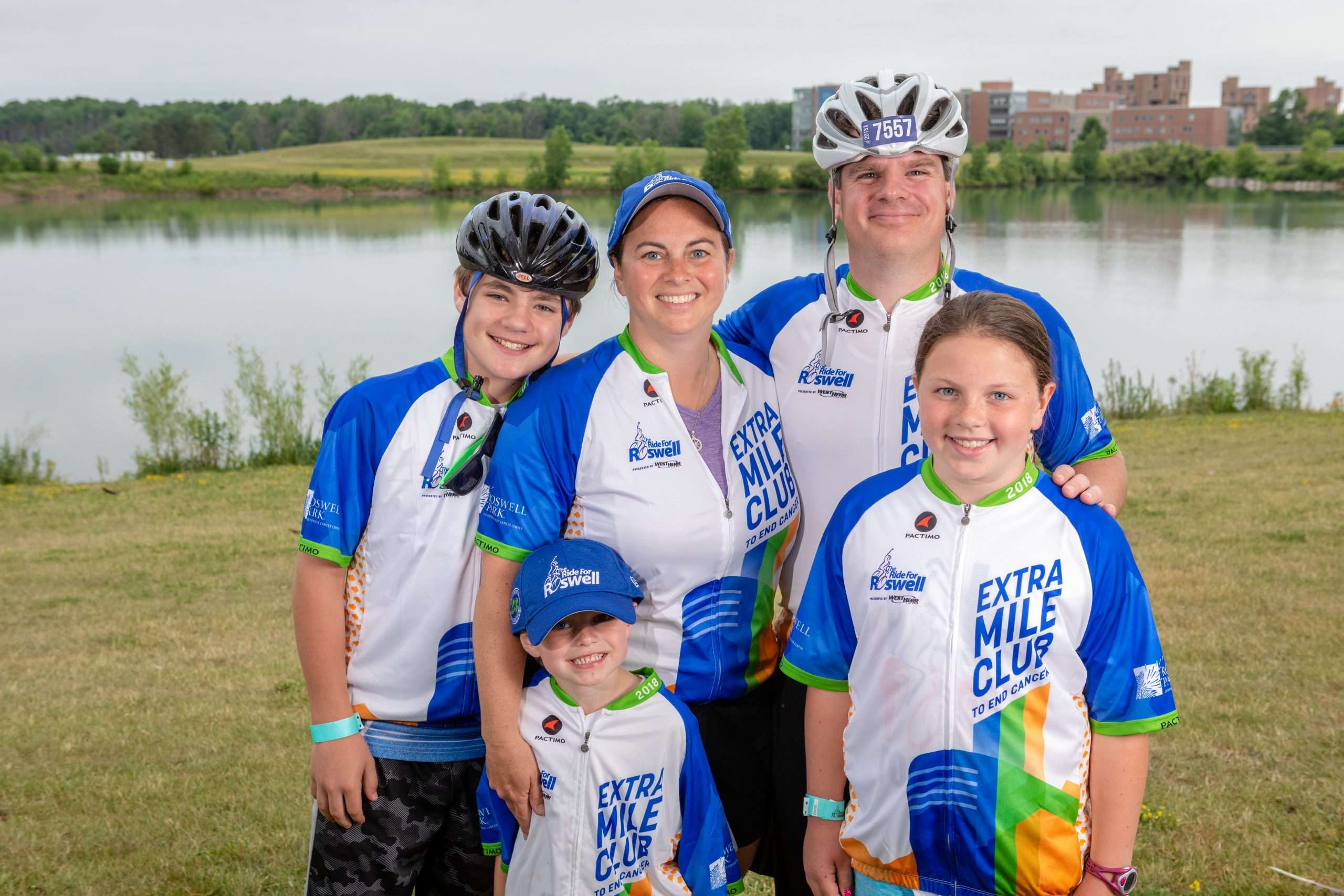 When asked how she describes her late husband, Garett, Casey Steck-Comeau is ready with a running list.

“He was a kind individual who loved his family,” she says. “He was outgoing, loved the outdoors and to travel. He loved riding his motorcycle, watching the Sabres and hanging out with friends. He was a high school English teacher and especially loved reading and writing poetry.”

The pair share a daughter, Marina, who was born in 2007. Casey’s favorite memory of Garett is watching him play with Marina.

As a 10-year brain cancer survivor, Garett took daily medication to help prevent seizures. However, beginning in the fall of 2007, he started having mini attacks. Despite increasing the dosage, the seizures did not subside. In early January 2008, an MRI revealed a golf-ball-sized mass in his brain. Garett and Casey were immediately sent to Roswell Park.

Garett had surgery and, as a result, was completely paralyzed on the left side of his body. He spent 63 days recovering in the hospital. And Casey and Marina were there every single day.

“Each day, I would come home from work, pick up Marina from day care, travel with all her baby gear to the hospital and stay until visiting hours were over at 9 p.m.,” Casey says. “We spent every weekend there, as well. We only missed one day — due to a snowstorm.”

Slowly but surely, Garett began to move again, never fully recovering, but enough to get around and back to work.

They continued with chemotherapy as well as physical and occupational therapy, and tried to live a normal life. Garrett was there for Marina’s first birthday.

But things got worse again. Spots reappeared on MRIs, and the seizures started increasing, too. Garett tried to teach, but eventually had to take a leave of absence. The family had to put a hospital bed in the living room and wheelchair ramps throughout the home. Eventually, he stopped eating and drinking, and Casey knew it was getting close to the end.

“I remember calling for an ambulance, knowing full well he would not be coming back home,” she says.

Garett passed away in 2009, just shy of Marina’s 2nd birthday.

Casey and Marina have continued to honor Garett and all those affected by cancer through their participation in The Ride For Roswell, starting when Marina was just 2 years old.

She was 4 years old the first time she rode her own bike. They did the 3-mile family route. Despite being the very last ones, they still finished.

“Marina made the front page of The Buffalo News that year,” Casey says. “We found out that early that morning, Dr. Trump [former CEO of Roswell Park] had seen Marina’s little pink bike with her training wheels on and her sign that said ‘in memory of my dad,’ and had sent the reporter to find us. I still have copies of the article.”

Throughout the years, it has become a family affair. Casey’s sister and her family even come up from Pittsburgh to participate. They’ve held various fundraising events and, over the course of nine years, have raised more than $80,000. When the donations come in, they try to get as many family members on their team to the $1,000 mark as possible, according to Casey.

“We all do different rides, but the best part is at the end, when we all get together to have our family portrait taken in the Extra Mile Club. It has become a tradition. I love looking back on those photos and thinking about how we came together to try and make a difference,” Casey says.

When asked why they continue to ride, the answer for Casey is simple. 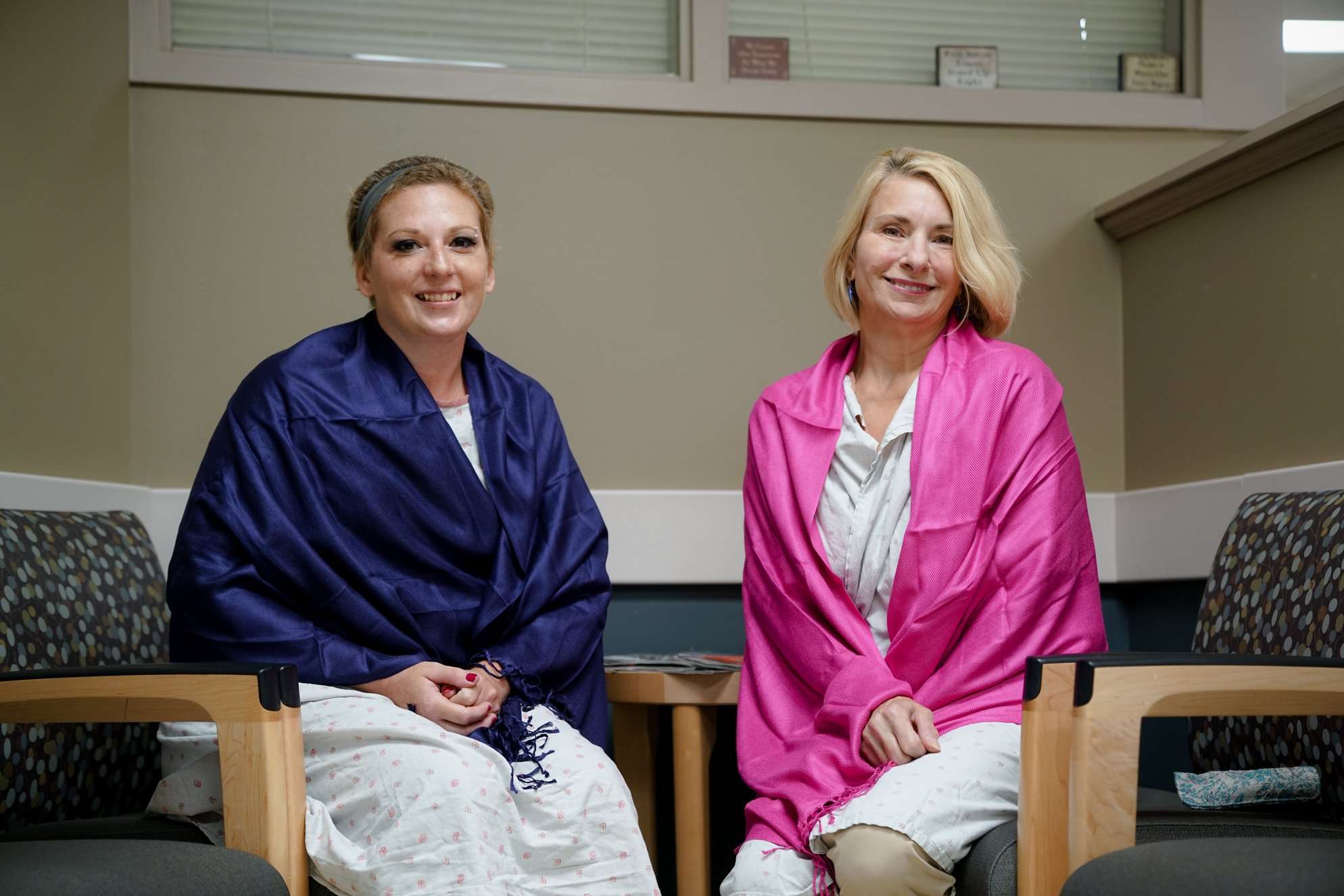 Sitting in the waiting room before radiation therapy can be scary, often bringing a harsh new meaning to the reality of a diagnosis. Roswell Park’s Teresa Kishel, Senior Radiation Therapist, had an idea about how to help provide comfort to these patients: soft, colorful shawls.

“A patient came in a few years ago wearing a shawl,” explained Kishel. “I thought it was a good idea. This wrap covers them, offers them modesty and keeps them comfortable while wearing a gown with an open back against chairs that can be cold.”

Kishel began this endeavor four years ago and secured significantly reduced pricing through Etsy. A quality-of-life grant made possible by your donations is covering the cost.

Feedback has been both positive and grateful. Patients are offered their choice of colors and may keep the shawl if they like. The shawls are also available through the Resource Center for patients receiving chemotherapy.